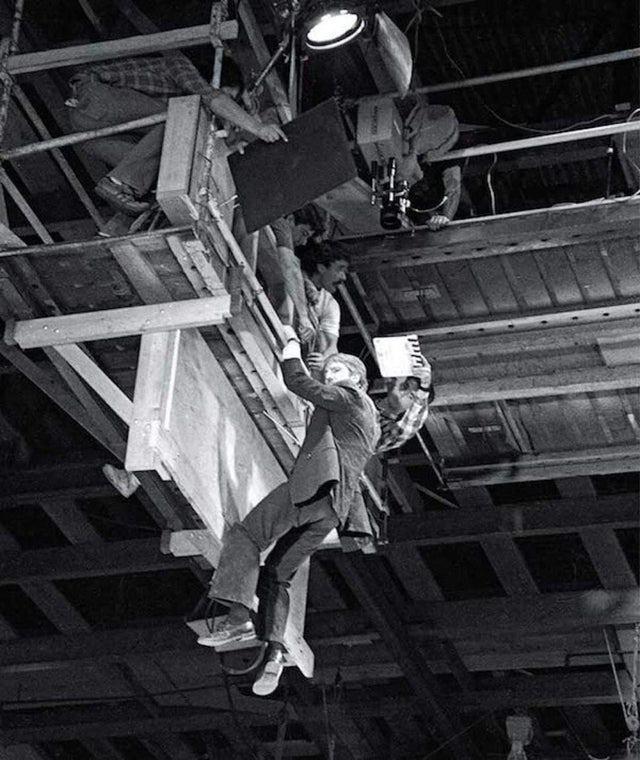 As we move into Christmas season, one debate is sure to come up among film buffs: is “Die Hard” a Christmas movie? Even though “Die Hard” was one of 1988’s biggest summer blockbusters, the film is set on Christmas Eve and a lot of people watch it during this time of year as a holiday tradition. For good reason, might I add – it’s a great action film, and has a star-studded cast. Among that cast is legendary stage and screen actor (and eventual Severus Snape) Alan Rickman.

The ending of “Die Hard” is one of many iconic scenes from the movie. Rickman’s Hans Gruber holds onto Holly’s (played by Bonnie Bedelia) wrist. Bruce Willis’ John McClane frees her from his grasp, and Gruber falls in slow-motion from the top of Nakatomi Plaza to his death. Obviously, the production couldn’t drop Rickman from the top of Fox Plaza in Los Angeles for the shot, so he was dropped onto a blue-screen airbag, as shown in this photo.

For the rest of the scene, however, a stuntman was actually dropped off the Fox Plaza tower along a slow-fall guide line to get the wide shot of Gruber falling. This wasn’t the only high-wire stunt in the film, though.

Bruce Willis was insistent on doing his own stunts, including the scene where McClane leaps from the building with a firehose wrapped around his waist. It involved leaping from a 5-story parking garage, fire-retardant gel to avoid being burned by the 60-foot-tall fire, and permanent hearing damage for Willis.

“Die Hard” ended up being a huge breakout film for both Willis and Rickman. Willis is still a huge Hollywood action star, and Rickman’s career exploded after “Die Hard.” In addition to his tenure in the “Harry Potter” series, Rickman was nominated and/or won Tony Awards, Emmys, Golden Globes, and numerous BAFTA awards for his acting talent on stage and on screen before his passing in 2016.

In this article:Alan Rickman, Behind The Scenes, Bruce Willis, Die Hard, Featured, Stunts