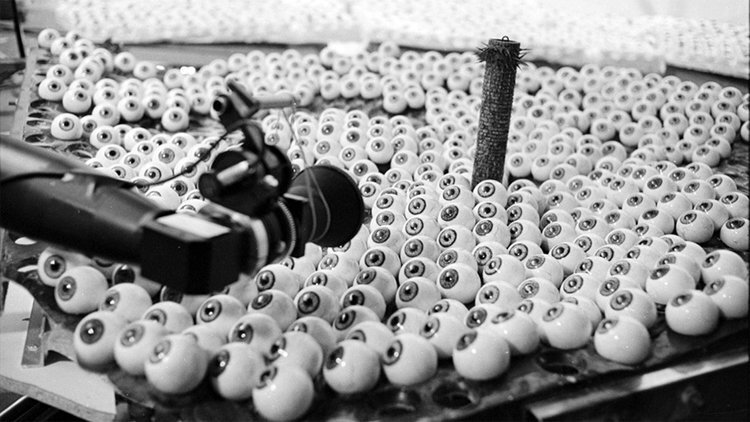 “Brazil” (1985) is the second installment of Terry Gilliam’s “Trilogy of Imagination,” preceded by “Time Bandits” (1981) and followed by “The Adventures of Baron Munchausen” (1988).

The film is … unique … to say the least, sort of what you imagine Gilliam’s thoughts to be if he ingested too many high-potency edibles.

According to Disc 2 of the Criterion release of the film, Gilliam had considerably more dream sequences planned for “Brazil” than was practical for time or budgetary reasons. Originally, all of the dream sequences in the movie—Sam flying, rescuing his love interest, fighting the giant samurai—were planned to be one single (!) dream sequence, the first one.

The sea of eyeballs, as seen in this behind the scenes photo, with Sam flying and landing on the pier, was going to be the second dream. It was envisioned that all the eyeballs would turn to Sam once he lands. Gilliam loved the concept, but in a “kill your darlings” moment, ultimately realized that it just wasn’t going to work. Instead, he ended up filming just one of the dream sequences and cutting it up throughout the film.