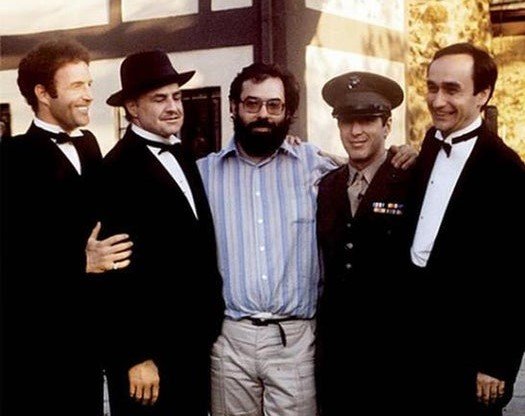 Actors and Coppola on Godfather Set

Writing about one of the best movies ever made is always a pleasure. Many argue that 1972’s “The Godfather” is the greatest movie of all time. Full stop. Others say that “The Godfather: Part II” is even better and therefore more deserving of the ultimate honorific. I personally feel that the original is slightly better than the sequel, though in my opinion neither beats “Citizen Kane” as the greatest movie of all time.

Nevertheless, where else can you bask in the glory of a photo of James Caan, Marlon Brando, Francis Ford Coppola, Al Pacino, and John Cazale all together but Metaflix.com? Soak it in, because this image is truly magnificent given the extraordinary cinema history being made at that moment in time.

Let’s also not forget how much of the film almost didn’t happen thanks to outside forces. For example, studio executives insisted that a notable actor play the breakout role, such as Robert Redford. But Coppola saw Pacino on Broadway and knew he had found his Michael Corleone. Reluctantly, the studio agreed … temporarily.

Later, executives thought Pacino was doing a poor job during production, describing his performance as “anemic.” According to Pacino, they tried to fire him three times during filming, but Coppola repeatedly rebuffed their efforts.

That’s just skimming the surface on all the Godfather drama, of course. There’s the whole Brando situation and even the real mob getting involved.

For fans who’d rather watch all the behind-the-scenes intrigue rather than read about it, they’re in luck. This past September, Metaflix reported that Barry Levinson is set to direct a drama called “Francis And The Godfather,” with Oscar Isaac starring as Francis Coppola and Jake Gyllenhaal as Paramount studio executive Robert Evans. The drama will look to explore the legendary and wild battles that went into making “The Godfather.”