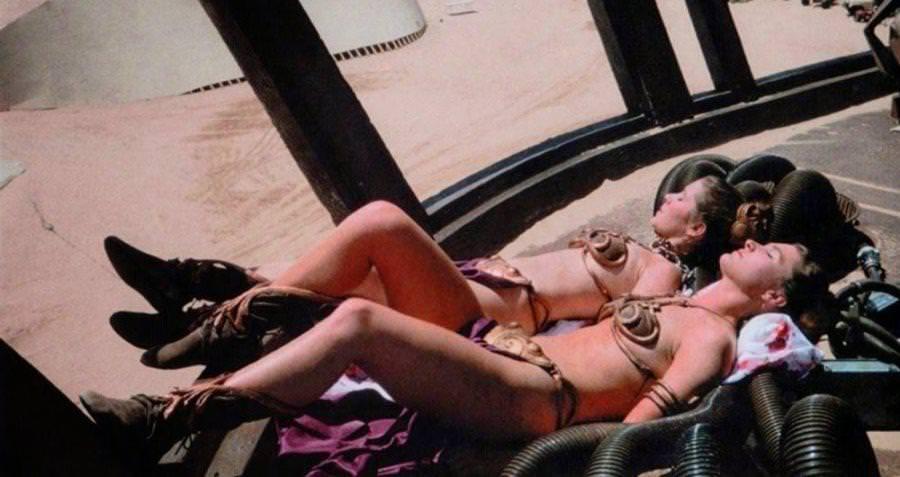 Carrie Fisher’s barely-there gold bikini in “Return of the Jedi” turned a lot of Star Wars fanBOYS into fanMEN.

It’s of my opinion that George Lucas most definitely had the hots for Fisher (not saying this to knock the guy either, I mean she’s HOT!) so as much as the costume was designed to blow the minds of the rabid fanbase, during the filming of those scenes it also served as a nice bit of personal titillation for the director.

Fisher later explained her thoughts regarding the costume in an interview with NPR:

“Nearly naked, which is not a style choice for me. … It wasn’t my choice. When [director George Lucas] showed me the outfit, I thought he was kidding and it made me very nervous. I had to sit very straight because I couldn’t have lines on my sides, like little creases. No creases were allowed, so I had to sit very, very rigid straight. … I hated wearing that outfit and sitting there rigid straight, and I couldn’t wait to kill [Jabba the Hutt].”

Immediately upon the release of the 1983 hit, the outfit was elevated to pop culture icon status. It has since spawned innumerable spoofs and parodies, along with being one of the more common (and tantalizing!) cosplays.

If you may now be wondering who owns the iconic outfit, I’m sorry to inform you that I can’t provide the answer. It hit the auction block in 2015, eventually selling for $96,000, however the buyer remains anonymous.