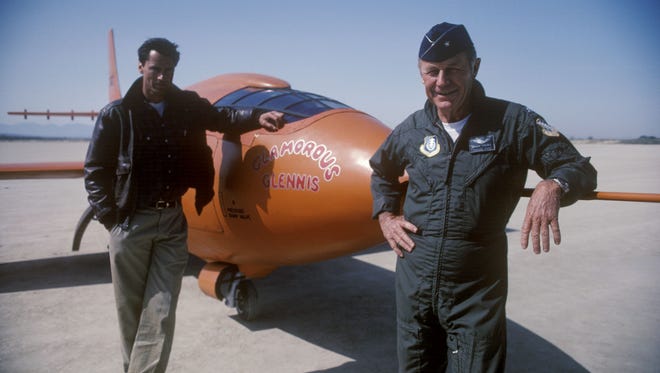 The world is a slightly less inspiring place with the news of Chuck Yeager’s passing on Monday night at the age of 97.

Yeager was a legend in his own right. But that legend grew with the publication of Tom Wolfe’s 1979 book, “The Right Stuff,” which features the acclaimed pilot as the unflappable dynamo who shatters the seemingly unbreakable sound barrier at Edwards Air Force Base in 1947.

As if that weren’t grandiose enough, Yeager was once again celebrated by the masses upon the release of Philip Kaufman’s 1983 film also titled “The Right Stuff,” adapted from Wolfe’s book. The movie was nominated for eight Academy Awards, winning a resounding four: Best Sound, Best Film Editing, Best Effects, and Best Original Score.

Beloved actor Sam Shepard embodied the role of Yeager for the film, effortlessly capturing Yeager’s easygoing yet confident charm, bringing even more popular recognition to the pilot’s accomplishments. Shepard sadly died in 2017 at the age of 73.

“What’s amazing about that performance is that it doesn’t seem to be a performance at all. Sam Shepard just is Chuck Yeager. He never breaks a sweat,” said film historian Leonard Maltin at the time of the actor’s passing. “It’s his presence and that effortless charisma that bowls you over. You could say Sam Shepard had the right stuff.”

Indeed, Shepard had the right stuff on the silver screen. Now try to imagine for just a moment actually doing it in real life.

If you’re interested in watching “The Right Stuff,” it’s currently streaming on HBO Max or widely available on demand.

In this article:Chuck Yeager, Featured, Sam Shepard, The Right Stuff