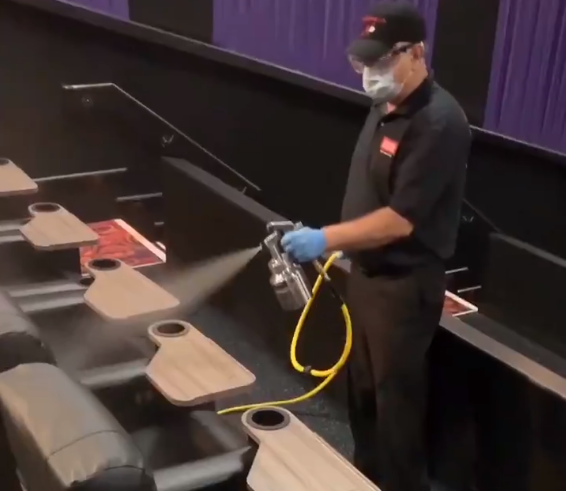 Here’s the scoop, folks: Metaflix’s dogged reporting on the ongoing reopening of AMC, Regal, Cinemark, Marcus, and Alamo Drafthouse has often included the intention of these theater chains to use ULV Foggers to sanitize auditorium surfaces and seats between screenings.

Throughout it all, my personal thoughts have generally been “great, the more sanitizing the better,” especially since Covid-19 infection rates are still elevated throughout the country.

But my overall sentiment quickly soured upon seeing the following video of a ULV Fogger in use:

So what exactly is a ULV Fogger? According to Wikipedia:

Ultra low volume (ULV) fogging machines are cold fogging machines that use large volumes of air at low pressures to transform liquid into droplets that are dispersed into the atmosphere. This type of fogging machine can produce extremely small droplets with diameters ranging from 1–150 μm. ULV machines are used for applying pesticides, herbicides, fungicides, sterilizers, and disinfectants amongst other chemicals.

The aforementioned theater chains would obviously be using the ULV Foggers for disinfecting and sterilizing purposes. But what substance(s) will they be using to do it? None of the press releases mention the chemical itself, so for the time being patrons have no idea what is in the air of the auditorium they’ll be sitting in for the next two hours.

This isn’t just to scare monger folks about the use of ULV Foggers, either. They certainly have very practical and beneficial applications. According to VectorFog, a manufacturer and seller of such products, Foggers are commonly used by hospitals, prisons, and nursing homes to disinfect critical areas, while also noting that “Foggers produce micro droplets that float in the air for around 10 minutes after application.” Duly noted.

However, movie theaters are huge spaces with tons of seats and poor air circulation. Maybe not quite the same as a hospital or other such environment.

So the question remains, does the movie theater industry’s use of ULV Foggers make you more or less likely to return to cinemas upon reopening? Sound off in the comments below.