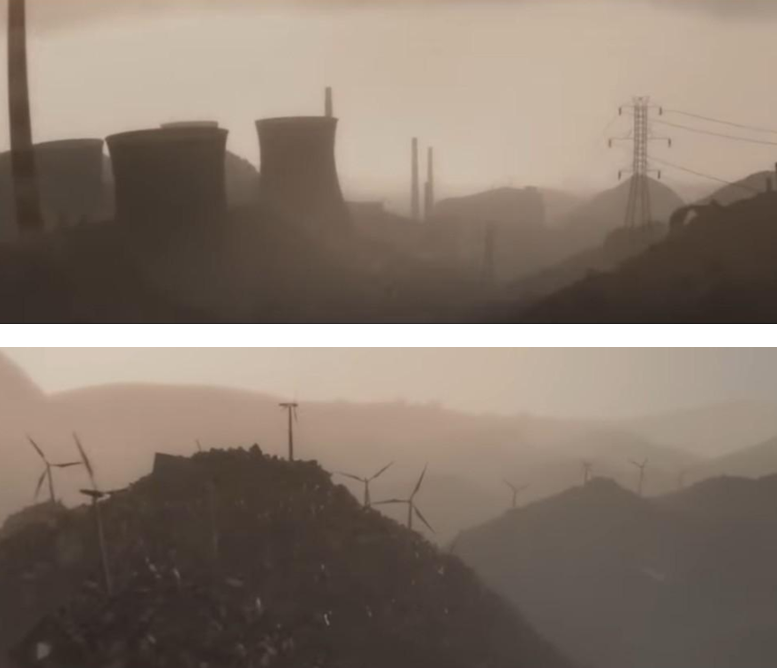 Pixar is notorious for packing all kinds of Easter eggs, trivia, and symbolism into their movies. The reason is partly due to the nature of Pixar, which prides itself on being fun, family friendly, and unapologetically smart. The rest is due to the fact that it’s a little easier to hide a bunch a inside jokes and pop culture references within something that’s animated as opposed to live-action, ain’t it?

This detail from the opening shots of “WALL-E” is no different, with the filmmakers making a subtle yet vital message with their imagery. What’s more, we here at Metaflix have a bit of a soft spot for ‘WALL-E’ these days. Avid readers of the site know that I only saw it for the first time somewhat recently as part of my research trying to find the new Wilhelm Scream. And it turns out that the new scream is the WALL-E Scream!

So check out the featured photo above a bit closer than before. Take notice that the wind turbines and nuclear power plants aren’t covered by the trash heaps. They are built among and sometimes atop the mountains of refuse. What does that mean? Civilization tried to convert to sustainable energy eventually, but by that time the damage was already done and it was too little, too late. Sound familiar?

Indeed, there’s a lot of talk right now about gender reveal parties and even some crazy nitwits deliberately setting fires. However, with much of the west coast ablaze, the southeast having to deal with incredibly powerful hurricanes, and global temperatures rising at “worst case scenario” rates, let’s not pretend climate change isn’t an urgent problem for the human species. Since we haven’t done everything possible to mitigate the problem in the past, the only other option is to do so right now.