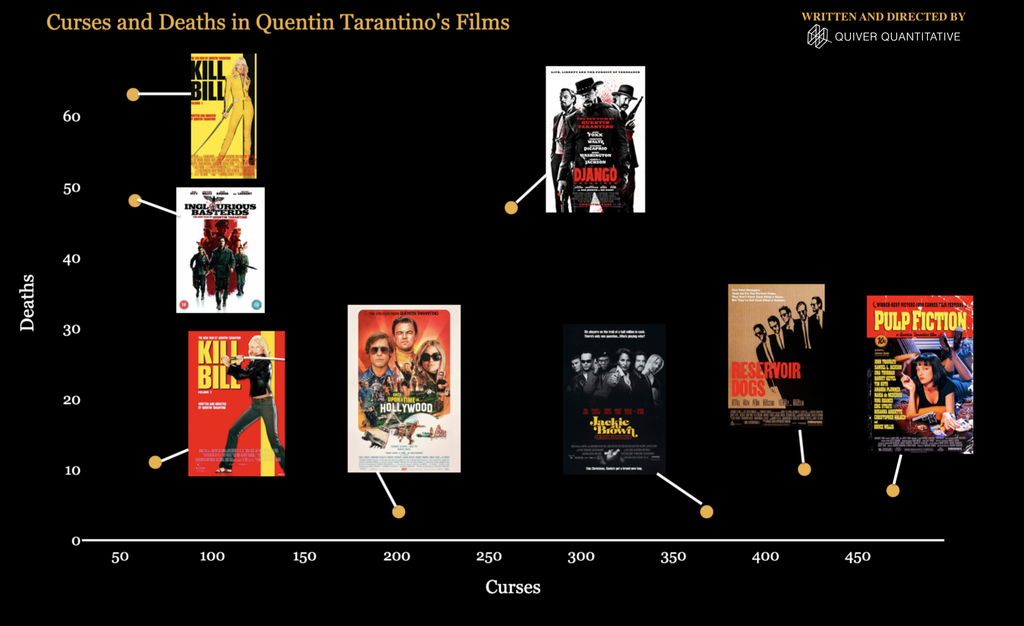 Quick: off the top of your head, which Quentin Tarantino film features the most cursing? How about the most killing?

Off the top of my head, I’d venture “Pulp Fiction” has the most cursing and “KIll Bill: Vol. 1” has the most killing. Gotta be, right?

“Pulp Fiction” isn’t a period piece like some of QT’s films, it features a bunch of filthy-mouthed gangsters running around L.A., and stars Samuel “Motherfucker” Jackson. That rules out films like “Django Unchained” and certainly “Jackie Brown.”

As for killing, the one scene in “Kill Bill: Vol. 1” playing over and over again in my head is the battle royal between the Bride and the Crazy 88s. Maybe another of QT’s films had more sustained killing, but that’d be so much harder to suss out.

Regardless, venture a guess of your own regarding which of Quentin Tarantino’s films notch the top slots of these two categories then check out the visual courtesy of Reddit user pdwp90 to confirm if either of us is right. And just for good measure, the Bride vs. Crazy 88s fight sequence is included below. Been a minute since I last watched it myself. Hot damn is it a masterful piece of filmmaking!