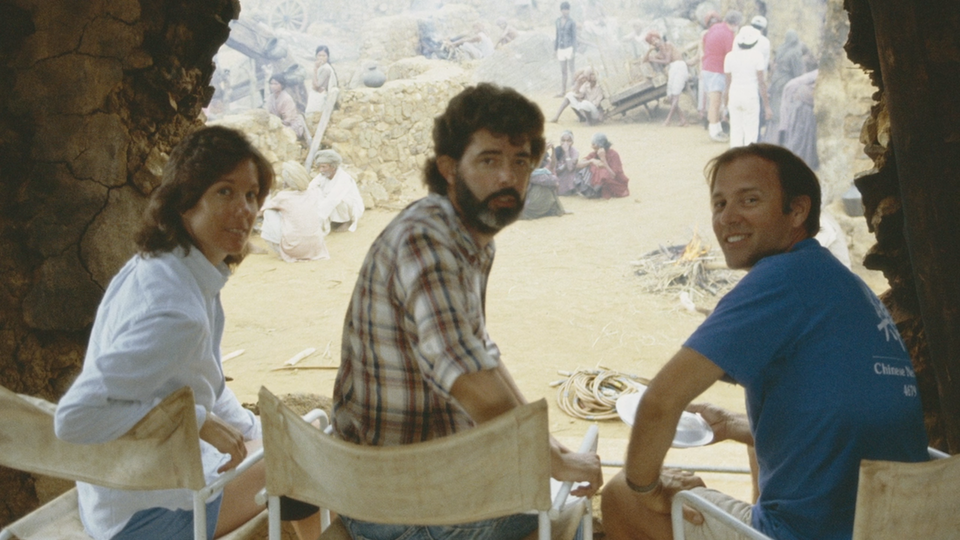 George Lucas, Kathleen Kennedy, and Frank Marshall on set of "Indiana Jones and the Temple of Doom"

Long before “Star Wars” changed pop culture as we know it, George Lucas conceived of an idea for a movie about a treasure-hunting archaeologist. After “Star Wars” made it big, Lucas went to his friend Steven Spielberg, and the two together developed “Raiders of the Lost Ark.” Of course, the film was a big hit, and the team returned for the sequel, “Temple of Doom.”

Filming “Temple of Doom” was not easy for Spielberg and crew. The film had to move shooting locations last minute after the Indian government banned the shoot due to the cult and black magic elements in the script. Instead, the film shot on soundstages in England, as well as in the jungle of Sri Lanka.

At the time of filming, Kathleen Kennedy was relatively new to the film industry. She had worked under Spielberg on “Poltergeist,” as well as “Raiders of the Lost Ark.” On “Temple of Doom,” she was an associate producer. Nowadays, she is one of the most powerful people in Hollywood, and is currently the president of Lucasfilm.

While George Lucas has since retired from filmmaking entirely, Kennedy and her husband Frank Marshall are still hard at work to this day. On Thursday, Disney announced another “Indiana Jones” sequel starring Harrison Ford (without Spielberg’s involvement), as well as a number of new “Star Wars” films and shows, all of which Kennedy will be leading the charge on. Simultaneously, Marshall is producing the “Jurassic World” reboot series, with the next entry set to release in 2022.