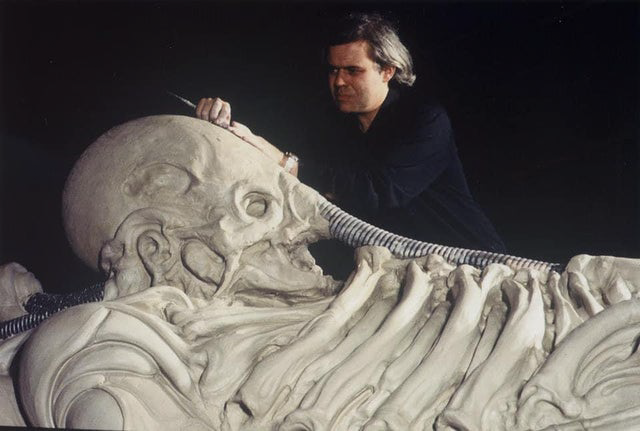 Artist HR Giger sculpting The Pilot on the set of Alien

Ridley Scott’s “Alien” films are some of the most iconic movies in horror history. Not only are the movies incredibly well made, they are truly terrifying films with intriguing stories and characters. One piece of these films that stands out, however, are their design. The iconic Xenomorph, as well as the chestburster and facehugger aliens, are all truly iconic monsters, all from the mind of the legendary artist H.R. Giger.

While working on Alejandro Jodorowsky’s doomed adaptation of “Dune,” “Alien” writer Dan O’Bannon met Giger, who was also working on the film. Giger’s disturbing, unique artwork left an impression on O’Bannon, and led him to take a script he was working on and retool it into what became “Alien.”

Though executives at 20th Century Fox initially thought that Giger’s work was too upsetting for wide audiences, Giger was eventually brought on to the project, and went on to create the most iconic monsters in film history. In this photo, Giger is sculpting The Pilot, a giant creature seen early on in the film before Kane is attacked by a facehugger while aboard the derelict alien ship.

The scene with The Pilot was very nearly scrapped, as Fox executives believed the gigantic set to be far too expensive for its brief appearance. After some convincing from Ridley and company, however, Fox allowed Giger to build the set, which he constructed and painted entirely by hand.

Though the set was obviously incredibly large, Scott was worried it wouldn’t appear big enough on camera. So, for a lot of the wider shots in that scene, the actors were replaced by the children of some of the film’s crew members. Obviously, all this hard work and ingenuity paid off, as this scene is one of the most iconic moments from one of the best horror films ever made.