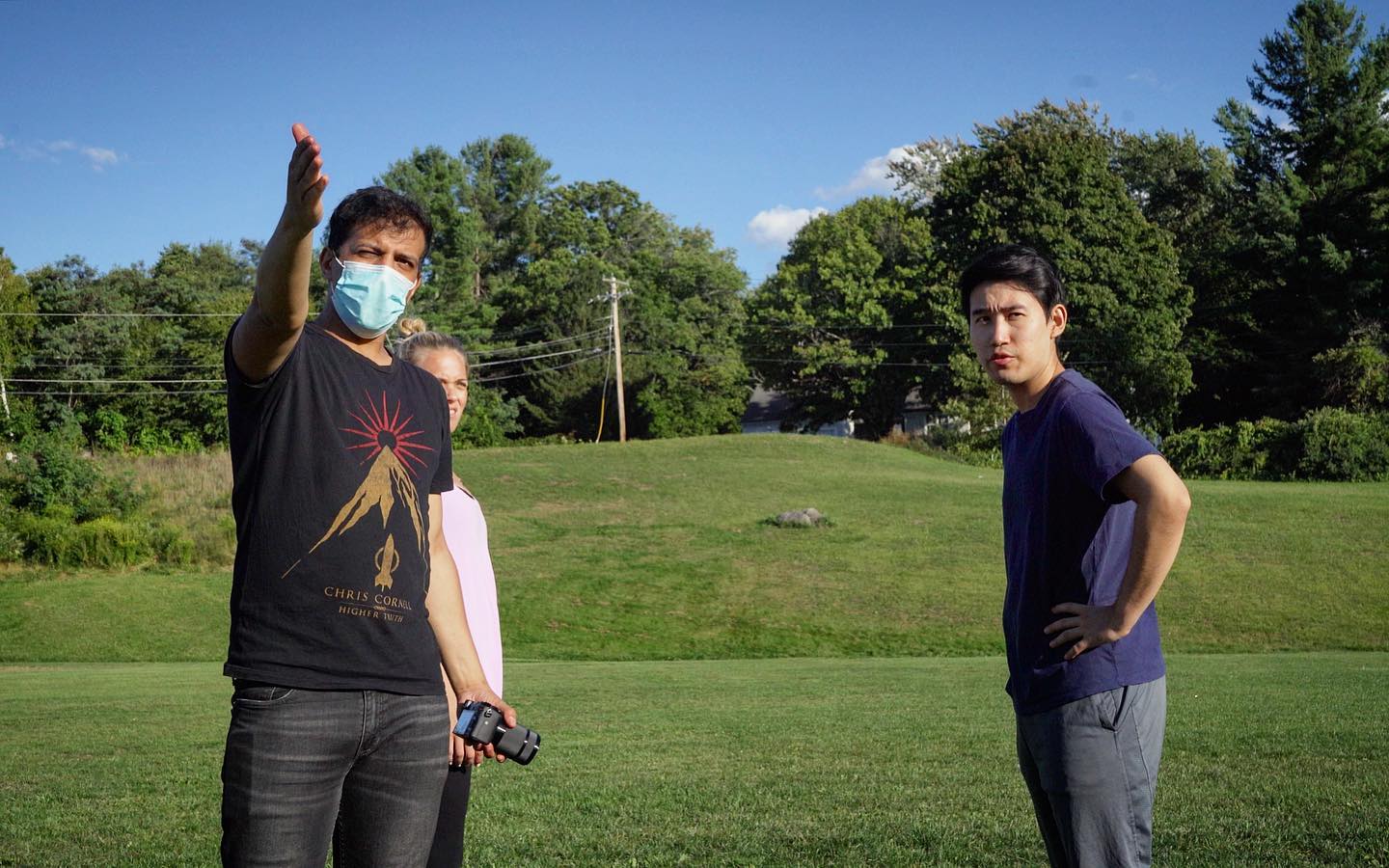 These are difficult times for those in the film industry. But you know the saying: when the going gets tough, the tough get going.

Just ask promising young filmmaker Hussein Hammouda, who has achieved more during the quarantine than many of those with the backing of a major movie studio. Hammouda successfully funded a production budget via Indiegogo, wrangled a socially distant and mask-wearing cast and crew to Boston, and triumphantly completed his debut feature film, “Dominoes.”

Hammouda describes “Dominoes” as being influenced by Richard Linklater’s “Slacker” (1990) and Jim Jarmusch’s “Night on Earth” (1991), with a de-centralized plotline and a series of vignettes that when strung together form a daisy chain of cinematic intrigue.

Metaflix sat down with Hammouda for an interview to learn more about his nascent journey as a filmmaker and to find out what it takes to pull off a debut feature in the midst of a pandemic.

Metaflix: Fans of the site know my enthusiasm for films set in New York City. Your short film “Lost in Transition: A New York Story” has some wonderful “Taking of Pelham One Two Three” (1974) vibes, while “Lee Paxton: Blade Jogger” has a number of striking visuals reminiscent of “Good Time” (2017) by the Safdie Brothers. If given the opportunity to make a full-blown feature film in New York City, what kind of story would you want to explore?

Hussein Hammouda: “Good Time” came out a month before we did both of those shorts, so that was absolutely something that was in the back of my mind while tackling them, especially because the Safdie Brothers’ beginnings were rooted in DIY filmmaking.

I would love nothing more than to return to New York to make a full-fledged feature, and there are two concrete ideas that I have for projects. One is a feature-length “Blade Jogger” adaptation where we explore that world and Lee Paxton’s psyche a little more, delving into his misconduct as a police officer and his substance abuse problems.

The other is akin to 2011’s “Drive” or Michael Mann’s “Thief,” but set in NYC. Both would explore a protagonist in the streets of the city late at night, with lots of neon colors and rain and dreamy, synth-wave scores. I feel like so many movies set in New York explore the hustle and bustle of the city when everyone is out and about, and I would love to do something that’s the antithesis to that on a big scale – like all the ones we get set in LA.

Metaflix: What were some of the starkest challenges you faced when scaling up from shorts to “Dominoes,” your first feature production?

Hussein Hammouda: Honestly, the hardest thing was getting it all together, trusting that people would show up to set in the middle of the pandemic, and getting the logistics of it right through a proper pre-production process, which I never really did on my shorts. We knew there would be a very small window where it would be safe to make the movie the way we wanted to before cases spiked again, and it was stressful to try and plan for all of that.

With my shorts, we shot those over a couple of days spread over weeks, and if Patrick or Alex didn’t feel up to it, we could reschedule for another night – there was no sense of urgency, unlike this. With this project, and its narrative structure, if we missed one day or the conditions weren’t exactly the same as the day before, we had no idea when we would be able to make that up due to the impending COVID spikes, and the whole movie could be lost.

Metaflix: Given that you shot “Dominoes” during the pandemic, in what ways did that impact production and in hindsight did the adverse conditions provide any silver linings?

Hussein Hammouda: When you’re making a feature during a pandemic, the smart thing to do would be to write a movie that’s just three people talking in a room. In my infinite wisdom, I took a different approach and wrote 26 different roles in 10 very different locations. And because I was trying to limit the amount of time that people were indoors together, almost all of our locations were exteriors, so we had to deal with a lot of wind and glaring sun.

Beyond  that, I didn’t want to get too many people involved because of the pandemic, so I did a lot of the things that we normally would bring other people in to do — location scouting, getting permits, scheduling, picking up cast and crew and dropping them off at night, and so on. The crew ended up being six people, and I honestly couldn’t have asked for a better six. These limitations helped create a really fun and intimate experience because we all got really close and were collaborating a lot on everything.

Metaflix: There are a few familiar faces in “Dominoes,” as actors Alex Dunn, Tristan Miller, and Patrick Dodge have appeared in previous projects. Can you provide additional insight about your collaborative process working together?

Hussein Hammouda: Good eye! I’ve known Alex for 11 years now, going back to doing plays together at UMass Amherst, and we’ve sort of been sharing creative endeavors with each other ever since. Tristan and Patrick are two people that I met really early into living in New York, working as waitstaff at a place called Iridium right in Times Square. We realized we’re all massive dorks and love movies and pop culture, so we all hit it off very quickly. Eventually, Alex moved to New York and came to work at Iridium, and that’s around when we all started collaborating and making shorts together.

Around 2017 and 2018, I think we were churning out one or two short films or skits per month, so we all became very familiar with collaborating with one another and had a rhythm down.

“Dominoes” was just more of the same. I wrote roles for all three of them, then I called them up a week later to say ‘Hey, I wrote a feature with a role for you. Can you test for COVID this week and be in Massachusetts next week?’ Before I knew it, they were here in Massachusetts, saying the lines exactly the way I wrote them down because we just have this understanding now, five years into working together.

I remember hearing Tarantino talk about how Samuel L. Jackson’s voice will flow out of his pen, and I didn’t really get that until I started working with these guys. They’re the Saoirse Ronan to my Greta Gerwig, the Michael Caine to my Christopher Nolan, the Ben Affleck to my Ben Affleck. I’m writing roles for them now, but I know that at a certain point, it’ll be me holding on to their coattails.

Metaflix: You describe the film as borrowing from Richard Linklater’s “Slacker” (1990) and Jim Jarmusch’s “Night on Earth” (1991). In what ways did you push the envelope to make “Dominoes” uniquely your own?

Hussein Hammouda: When I sat down to write “Dominoes,” it was preceded by watching Kelly Reichhardt’s “Old Joy” and Jarmusch’s “Night on Earth.” I was attempting to combine the two movies in my approach to “Dominoes” – the ultra-low budget approach of “Old Joy” and the no-rules approach of “Night on Earth,” which was five vignettes strung together. It wasn’t until 30 pages in that I realized I was finally doing my own take of “Slacker,” which was something that has been in the back of my mind for maybe five years now.

Unlike “Slacker,” I liked the idea of circling back around and seeing those same characters again, but perhaps in another light, and so I managed to do that through inserting a twinge of science-fiction to the plot. Thus, through the use of parallel dimensions, you begin to see the same characters and the movie finds a little more of a plot. Things that were left open ended at the beginning are now getting resolved by their parallel dimension counterparts. The man who wouldn’t give money to the homeless man is now homeless himself and understands the value of $2, the failed actor is now a mega-star and understands what comes with that level of success, etc.

Metaflix: Let’s revel in the boundless possibilities of wishful thinking. What do you hope “Dominoes” is able to achieve in 2021?

Hussein Hammouda: I’m going to be very boring with my expectations. The fact that 65 people saw our IndieGoGo and thought, ‘I believe in you, this project, and your career — here’s some money to make the movie’ is so exciting to me, and the same sort of mindset translates over to what I hope  happens when it gets released.

I know that it’s not going to be a box office smash, but I would truly love nothing more than to get it out to festivals so that people can experience it in theaters when it’s safe again. I made it for my love of telling stories, and I hope we can captivate people and take them along for the ride. That being said, I’ve had some conversations about distribution for it, and that’s exciting for that very reason – because it would potentially allow us to reach a wider audience. I was expecting to self-distribute on Amazon, so having those talks is a blessing in and of itself.

Metaflix: What’s next for you as a filmmaker?

Hussein Hammouda: “Dominoes” and all that we did with it was kind of a battle cry, it’s me showing that I can and will make a feature, even if I have to do a lot of the heavy lifting myself.

I’m working closely with Max and Sally to get my next movie, “9/12,” up and running, hopefully for later this year. It’s a semi-biographical story that follows an Arab-American boy trying to find his place in a post-9/11 America in the years after those tragic events, and it’s something that I haven’t really seen done before. It’s like if you threw “Eighth Grade,” “Hunt for the Wilderpeople,” and “Ramy” into a blender, and I think it will be a very enjoyable and accessible film that will, in turn, humanize a part of the population that I don’t think gets equal representation in film.

In an ideal world, we can do that in Fall 2021, assuming this pandemic clears up by then. If not, I have a back-up script about cloning that I’ve been working on with Tristan for many years now, and that’s something we can feasibly do as an ultra-low budget indie sometime this winter, following in the footsteps of Jim Cummings with 2019’s “Thunder Road.”

Thank you, Hussein. We’re looking forward to seeing “Dominoes” and all that follows.