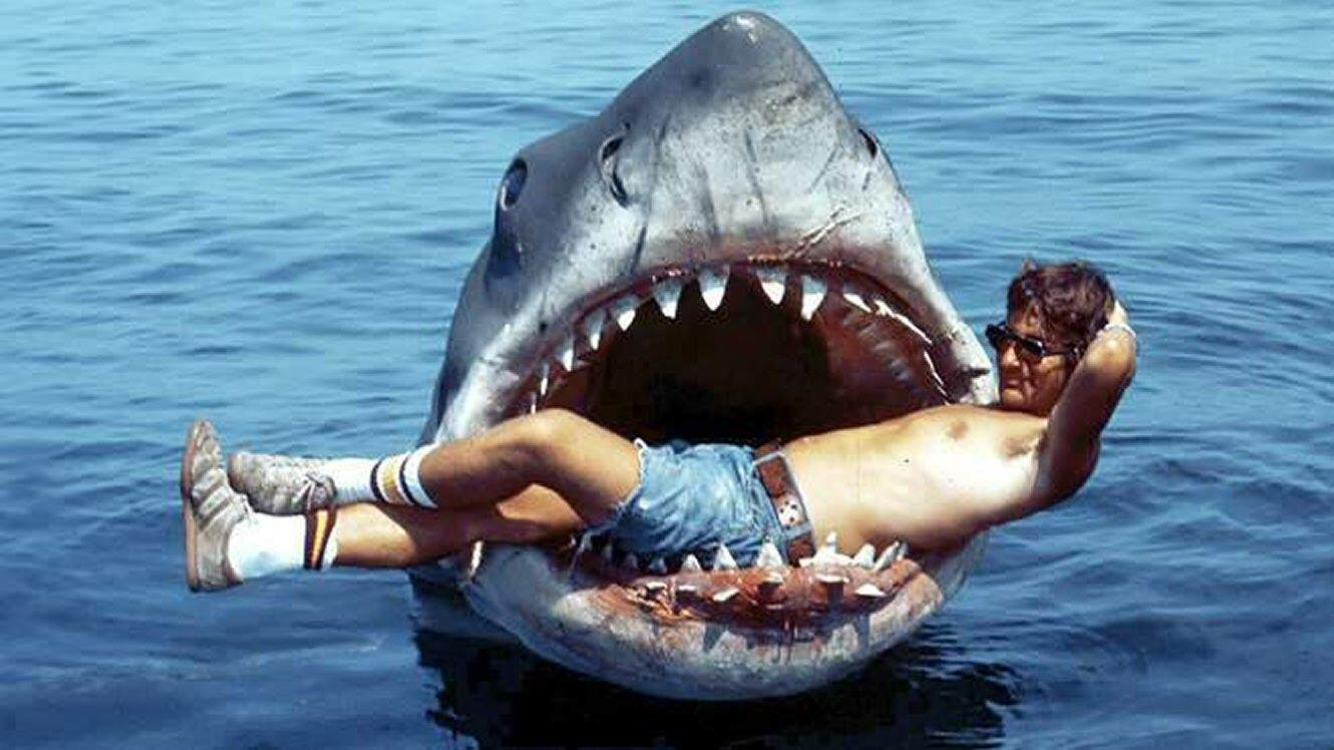 I’m going to level with you here. I don’t really know where I stand on “Jaws”. On the one hand, it’s a pretty damn good movie, and the first real summer blockbuster. On the other hand, it completely misrepresented the shark, contributing to the murder of thousands. But on a mysterious third hand, it inspired a generation of scientists and researchers, providing them funding. Work with me here, as I try to figure out how to make sense of a movie that confuses me more than “Tenet”.

First off, the movie itself. Not much needs to be said about it. It’s two hours of raw, action packed fun. Extravagant set pieces and a pure popcorn thriller. Also, a movie that saw a barely proven director, Steven Spielberg, take command of a craft he would later completely own. Of course, it’s not without its flaws, but for what it was—the defining summer blockbuster—it deserves the praise it gets.

But as an advertisement for sharks? For that it gets two thumbs down. Not only did it portray the Great White Shark as a calculated killer, stalking its human prey and attacking with full force, but it did so inaccurately. Sharks don’t hold grudges.

There is no evidence to suggest sharks attack humans for any type of vengeance or cruelty. Common wisdom holds that sharks attack humans because they believe they are seals, or they don’t know what we are and are trying to figure out if we are food. However, some newer research suggests that sharks’ senses would not allow them to make such trivial mistakes. Instead, they argue, sharks are attacking to tell humans to leave the area (they see them as competition as predators).

Either way, the numbers tell one story. They don’t want to attack humans, and when they do, they don’t want to kill them. On average, there are only 16 shark attacks in the United States, but only one fatality every two years (although both those numbers have been trending upwards). Moreover, only three species of sharks really have gone after humans (Great White, Bull, and Tiger). That’s three out of… well, over five hundred.

So, “Jaws” got it wrong. Simple as that. But it’s a movie? Who cares if they took some liberties? It’s a thriller, and they created an epic villain. The issue lies in the fact that the decision had real world consequences. Research has shown that in the years following “Jaws,” the number of large sharks decreased by 50%!

Now, I don’t want to overexaggerate the influence of the movie. Most of this decrease was due to commercial fishing for the popular dish in Asia, shark fin soup. But some of it was due to “Jaws” itself. George Burgess, director of the Florida program for shark research, says, “Thousands of fishers set out to catch trophy sharks after seeing Jaws.” And many people were happy to see these dead sharks, as “Jaws” had painted them as a monster.

All Press is Good Press

This movie killed sharks. Importantly, because of the inaccuracies of the movie. But sometimes, the phrase “All Press is Good Press” can have some truth to it. Because, while the tragedy that plagued one of the most beautiful species in the world makes me want to hate “Jaws,” the added interest in shark research makes me temper my views.

The writer of the original book (and screenplay), Peter Benchley, was so taken by seeing finned sharks lying at the bottom of the ocean, that he dedicated the rest of his life to shark conservation, all the way until his death in 2006. In fact, years after “Jaws,” he said, “Knowing what I know now, I could never write that book today,” and that if he had to do it again, they “would have to be written as the victim, for, worldwide, sharks are much more the oppressed than the oppressors.”

Sharks also entered the mainstream conversation thanks to Benchley’s story. An area of study that had very little funding before now got the attention it deserved. Although many people still fear sharks, they have been garnering more respect in recent years. While there is still a lot of work to be done, the trend is looking up. Governments are instituting policies to protect sharks, and the populations are slowly, but surely, rebounding.

One direct benefit of “Jaws” was making people excited to see sharks in real life. While directly after the movie, people may have thought a dead shark was more valuable, today that logic doesn’t hold. In Palau, they estimated that a dead shark was worth about $108. Conversely, a live shark was worth $1.9 million over its life. Over 30% of the Maldives’ economy comes from shark eco-tourism. At least partially due to “Jaws,” living sharks became valuable. And when living sharks are more valuable than dead ones, you can bet corporations and governments will fight like hell to keep them alive. After “Jaws” had killed sharks, it may be starting to do some good.

Sharks are undeniably my favorite animal. Ever since I was a kid, I have been obsessed with these beautiful, misunderstood creatures. That makes my relationship with “Jaws” so complicated. I’m not sure if I worked out how I feel about the movie from this piece.

But one thing has become crystal: movies can have a real impact. And it is up to creators to think hard about how they want to portray real life before they put them on the screen. Perhaps the reason I am confused on “Jaws” is precisely because it was such a good movie. It reached so many people, for better and for worse.