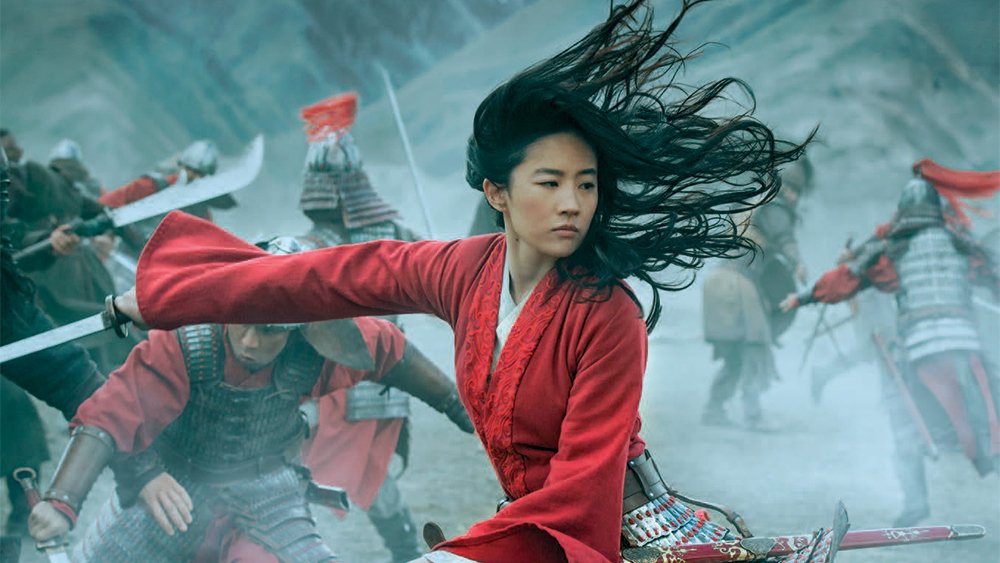 I must first preface this review by saying that the 1998 animated Mulan is one of my favorite movies of all time. Not favorite Disney movies. Not favorite animated movies. Favorite movies. I saw it in theaters when I was 7 years old and the combination of action, music, humor, and the inventive, brush-stroke elegance of the hand-drawn animation was perfect for me to see at that age. Later I learned that Chinese reception to the movie was lukewarm to negative, for reasons I could understand (the movie portrays some unflattering Asian stereotypes, like every character having “honor” as a motivation), and some I couldn’t (the Chinese “hate musicals”).

Disney, for their part, tried to listen to some of the qualms the Chinese had with the animated movie and tried to do right by the ancient but popular legend. I don’t feel like it’s my place as a white American woman to comment on what Disney did or didn’t get right about the Chinese martial arts movie genre, or the accuracy to the original ballad. But in trying to fix their “bastardized American version” of the Hua Mulan legend, Disney released . . . a bastardized American version of the Hua Mulan legend, without a lot of the charm that the animated movie had.

To get the elephant out of the room, yes, I did pay the extra $30 to stream Mulan. For that I must point to some movie math: in New York City, where I live, movie theaters are currently not open, but when they were, the baseline price for a movie ticket for an adult was $15. So for me and my husband to go see a movie, we often paid $30 anyway, without concessions or fancy movie trappings such as IMAX or 3D. I’ve paid a lot more money to see a lot worse movies. And, unlike other pandemic streaming releases, the $30 buys unlimited streams of the movie rather than a one-time “rental.” But if you’re strapped for cash, you can wait until December 4th when Disney releases it for “free” (well, $7 a month) streaming on Disney+ and not miss much.

Mulan follows Hua Mulan (Yifei Liu), a young woman in ancient China who takes her ailing father’s place in the emperor’s Imperial army to save his life. In both the animated and live action movies, the villain on paper is a nomadic “Northern invader” with a lot of Mongolian and Hun influences, but the villain is also ancient China’s rigid gender roles. A lot of the narrative tension of the story is the Catch-22 of Mulan’s honor: she failed at bringing female-coded honor to her family by messing up a marriage match, but if she tries to bring honor to her family in male-coded ways such as going to war, she will die, either through being killed in action or executed by being found out as a woman. The latter option will bring shame upon her family anyway.

Disney fans treat the live-action remakes of their movies like book fans treat movie or TV adaptations of their favorite books. Like grief, there are a few stages, and they are as follows. First, there’s validation: the thing you like is popular enough to warrant an adaptation! Then, there’s cautious optimism. Will they cast the right actors? Does the director’s vision match the themes you like in the original? Then there’s watching the adaptation and analysis. What deviations from the original were present, and why? Does the adaptation stand on its own enough, or does telling the story in a new medium take away some of the things that made the original great?

A few of the choices of the live-action Mulan improve upon the animated movie. For one, the medium of live-action can bring scale to a battle scene that is difficult to show in animation. The battle scenes in Mulan are beautifully filmed and evoke other great film battles such as in The Lord of the Rings trilogy. The Rouran, led by villain Böri Khan (Jason Scott Lee) ride on glamorous black Friesian horses like the Nazgûl and are just as intimidating. (The Rouran also partake in the Hun tradition of standing up on their galloping horses to fight—let’s see the undead Nazgûl try to attempt that.) Böri Khan also has more developed motivation than the animated Shan-Yu. Khan has a vendetta against the Emperor (Jet Li) for killing his father, whereas Shan-Yu seems to antagonize the Emperor for . . . fun? It’s never really clarified.

But other deviations from the animated movie are less welcome. Many complained about the fact that the live-action Mulan is not a musical, and were told that the musical score would be an “emotional” tribute to the songs of the animated movie. But the movie is strangely quiet. Sometimes this allows for the actors to actually act: Tzi Ma as Mulan’s father Zhou does this well. But other emotional moments in the movie are much quieter, and only two songs, “Honor to Us All” and “Reflection,” get the “emotional” score treatment, and even then only for a few seconds.

Li Shang, Mulan’s commander from the animated movie, was split into two roles for #MeToo reasons as some saw Mulan’s love interest being her superior as problematic. Mulan now has Commander Tung (an excellent but underused Donnie Yen) with whom she has no romantic interest, and her fellow soldier Honghui (Yoson An) who serves as the love interest. There is also the addition of the witch Xianniang (Li Gong), who, as another woman trying to find her place in a man’s army, could have been an intriguing foil to Mulan but ultimately just contributes to some cool fight scenes but not much else.

But, to get back to the original point: is Mulan worth the $30 to see it before December 4th? I would weigh your decision on the answer to two questions. One, how much do you love the animated movie? I love Disney’s “Renaissance” (ie their animated films from the 1990s) and my reception to their live-action remakes have been on the spectrum of mixed to cold. So far the live-action remakes have only really expanded upon the source material in their development of the villains, from Angelina Jolie’s deliciously scene-chewing version of Maleficent to Idris Elba’s menacing Shere Khan in The Jungle Book. But beyond that, the live-action remakes don’t really try to justify their existence beyond the Mouse needs more money. The results come off as overly cautious at best (Aladdin, Beauty and the Beast), or lazy at worst (The Lion King).

Two, and perhaps more importantly: are you and your kids strapped for streaming content? There is of course the animated movie streaming for free on Disney+, as well as Rogue One for family-friendly Donnie Yen martial arts goodness. On Netflix, Avatar: The Last Airbender and its follow-up The Legend of Korra provide quality kid-friendly martial arts content. HBO Max has all the Hayao Miyazaki films streaming if you want strong female characters in cartoon settings. If you want live-action female hero content, I would turn to Wonder Woman on HBO Max or Captain Marvel on Disney+. Parenting is expensive enough already; save your money and wait for December 4th for this one.

In this article:Disney Plus, Featured, Mulan