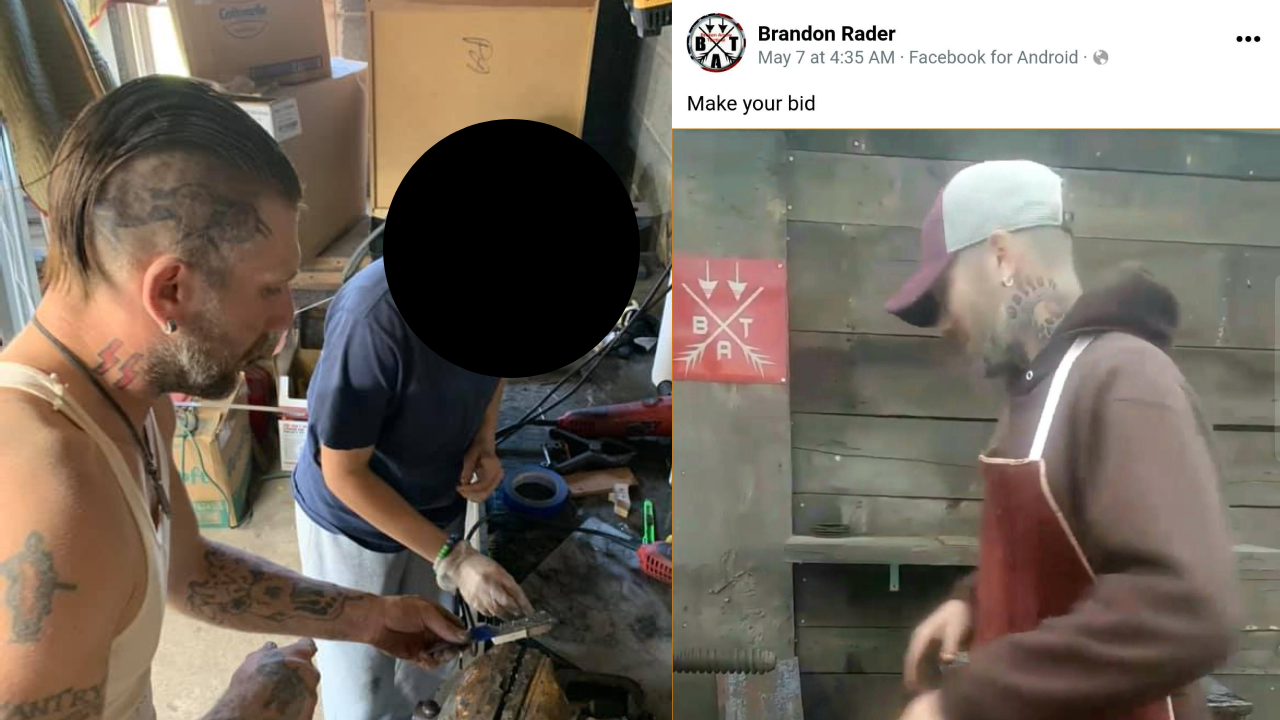 FAIR USE via Facebook/Brandon Rader

Apparently the only thing an alleged neo-Nazi needs to do in order to be allowed to compete on History Channel’s “Forged In Fire,” one of cable television’s most popular primetime shows, is throw on a bandana to partially obscure a couple of hate symbol neck tattoos.

At least that’s the impression fans were given on Wednesday night when the hit bladesmithing series aired its season 8 premiere titled “Veteran’s Knife Special.” In it, contestant Brandon Rader of Everett, Pennsylvania, arrived representing the Army as part of a themed show belatedly honoring Veterans Day.

Throughout the initial two rounds of competition, Rader can be seen wearing a green camouflage bandana wrapped around his neck despite the fact that no other contestants or judges were wearing similar face or neck coverings, such as a neck gaiter. Furthermore, the forging floor is notoriously hot during the hours-long contest. Many competitors–including one on this very episode–suffer from the emergent effects of heat stroke and risk being medically removed from competition. Therefore it would seem rather unusual, if not entirely inadvisable from production staff, for a competitor to unnecessarily wear additional layers as part of one’s wardrobe selection.

However, knowing that Rader allegedly brandishes a tattoo of SS Bolts on the right side of his neck and the word “Waffen” above a Nazi Death’s Head on the left side of his neck, it becomes shockingly clear why he was compelled to wear the bandana while raising the striking question of how “Forged In Fire” producers, judges, and/or crew could incomprehensibly allow Rader to appear on the show.

To be clear, SS Bolts and the term Waffen blazoned above a Death’s Head are commonly used, incontrovertible neo-Nazi hate symbols. According to the ADL, the SS Bolts are derived from Schutzstaffel (SS) of Nazi Germany and have since been adopted by white supremacists and neo-Nazis around the world. The Death’s Head, or “Totenkopf” in German, became the symbol of the SS-Totenkopfverbande. Many members of this organization were later transferred into and became the core of a Waffen SS division, the 3rd SS “Totenkopf” Panzer Division, which engaged in a number of war crimes during World War II.

It’s fair to question whether Rader was so diligent about hiding his alleged hate symbol tattoos that nobody from the “Forged In Fire” production team noticed. However, at the very least his alleged Waffen tattoo was noticeably evident throughout the show and it strains credibility to believe that no one, especially after so many hours and days of shooting, acknowledged what viewers at home can readily perceive.

Furthermore, while at a glance the alleged lettering of “Waffen” may be more likely to go unnoticed, Rader’s alleged bright red SS Bolts on the right side of his neck would be far more readily recognized. Hence it’s interesting that not only was this tattoo diligently hidden by a bandana throughout the show, but an additional bandage appears to have been applied directly to the area in order to further obscure the symbol from cameras. The question remains, naturally, what–if any–part “Forged In Fire” production staff had in doing so.

Let’s also not bury our heads in the sand when it comes to Rader’s apparent enthusiasm for giving a nod and a wink to his alleged fondness of neo-Nazi symbolism. In the third round of competition, contestants return to their home forge to create a final blade. In this case, a sword.

Rader opted to adorn his sword with stars, a couple of historically significant dates, and, of course, lightning bolts. “For the design of this sword, I want to integrate some stuff onto the blade, so I’m going to go ahead and do some etching on it … I think I’m going to put some stars on it, put some lightning bolts, to symbolize the storm that every soldier goes through in his life,” Rader says about the questionable symbols. Rader then proceeds to test the effectiveness of his sword by chopping at a tiki torch, another questionable symbol in the aftermath of the Charlottesville march.

Could the lightning bolts and tiki torch be coincidences? Yes. Could they be just as purposeful as one might now conclude given all the other details of this disgraceful saga? Also, yes.

Metaflix is celebrating Veterans Day for the entire month of November. In turn, we’re offering 20% off ALL our awesome t-shirt designs using the promo code VETERANS20. Click HERE or on the image below to browse our store:

Continue Reading
You may also like...
Related Topics:Featured, Forged In Fire, History Channel