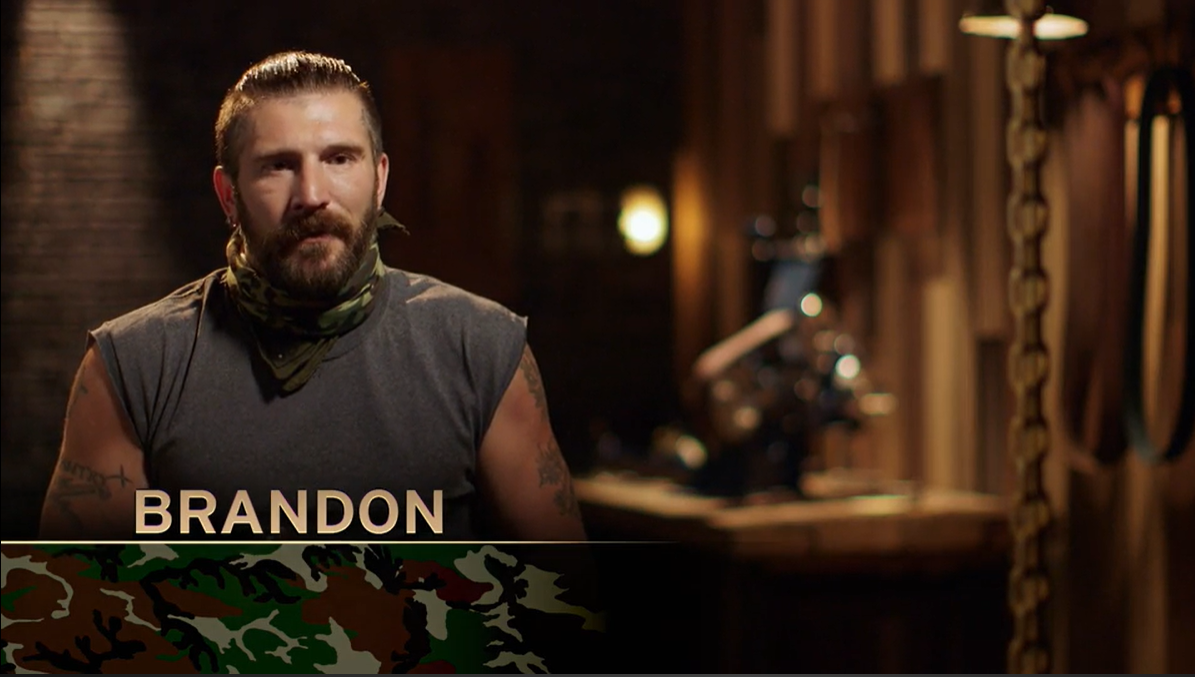 Forged In Fire (FAIR USE screenshot via “History.com”)

Last Wednesday, fans of History Channel’s “Forged In Fire” were seemingly treated to another season and new episode of one of cable television’s most popular primetime shows.

Other than the debut of a new host, Grady Powell, who has taken over the emcee duties from fan favorite Wil Willis, casual observers may not have noticed anything different or amiss with the season 8 premiere. However, sharp-eyed viewers noticed several irregularities regarding contestant Brandon Rader, with a giant red flag being raised once audiences observed the lettering of a tattoo allegedly reading “Waffen” on the left side of his neck that was seemingly meant to be obscured by a bandana throughout the shoot.

According to photos posted to Rader’s public Facebook page, the alleged Waffen lettering sits atop an alleged Nazi Death’s Head insignia. Furthermore, on the other side of his neck, Rader brandishes a tattoo allegedly displaying SS Bolts.

Both are considered hate symbols by the ADL, adopted by white supremacists and neo-Nazis around the world. The SS Bolts represent the Schutzstaffel (SS) of Nazi Germany. The Death’s Head, or “Totenkopf” in German, represents the SS-Totenkopfverbande. During World War II, many members of the SS-Totenkopfverbande became the core of a Waffen SS division, the 3rd SS “Totenkopf” Panzer Division, which engaged in innumerable crimes against humanity throughout the war.

Rader, of Everett, Pennsylvania, was featured as a contestant representing the Army on the season 8 premiere episode as part of a themed show titled “Veteran’s Knife Special.” Throughout all three rounds of the competition, Rader can be seen wearing a bandana wrapped around his neck in an attempt to obscure the tattoos.

However, in addition to the alleged Waffen lettering on the left side of Rader’s neck being visible, footage reveals a medical bandage apparently covering the alleged SS Bolts on the right side of his neck in what looks to be an additional, deliberate attempt to further hide the tattoo from cameras.

The questions that remain to be answered, naturally, are what–if any–part “Forged In Fire” production staff had in assisting with the coverings along with how any of the producers, judges, and/or crew could possibly allow Rader to appear on the show.

Metaflix reached out to the companies responsible for producing “Forged In Fire,” Outpost Entertainment and its partnered production company ITV America for comment, but so far they’ve declined to issue a statement on the matter.

The lack of any statement, however, does not imply that they are unaware of the troubling circumstances regarding Rader’s appearance on the show. After Metaflix published the original article about the incident on Friday, a number of actions were taken in what looks to be an attempt at damage control.

First, all references and promotional posts regarding the season 8 premiere episode were scrubbed from the “Forged In Fire” Facebook and Instagram pages. Next, the episode itself appears to have been pulled from circulation, having been removed from History channel’s website where it was originally available for streaming. The below screenshots show the before and after results of the decision to remove the episode.

Everything considered, the combined circumstances raises a number of troubling questions that remain to be addressed by “Forged In Fire” producers, History channel, or its owner, A&E Networks. How could Brandon Rader successfully make it through the show’s vetting process? Was Rader advised and/or assisted by production staff in covering up the alleged tattoos? And was the explicit decision made to allow Rader to compete despite knowledge of his alleged ideology?

Metaflix will continue to pursue these questions while providing updates and any follow-up articles as they become available.

Metaflix is celebrating Veterans Day for the entire month of November. In turn, we’re offering 20% off ALL our awesome t-shirt designs using the promo code VETERANS20. Click HERE or on the image below to browse our store:

Continue Reading
You may also like...
Related Topics:Featured, Forged In Fire, History Channel