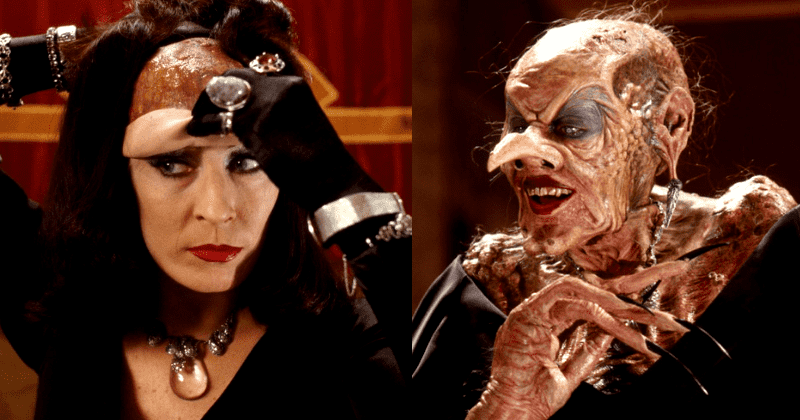 Metaflix reported over the weekend that the official poster for “The Witches” remake had leaked. In the process, it dredged up all kinds of childhood trauma and terror.

The original 1990 flick starring Anjelica Huston–adapted from the 1983 novel by Roald Dahl–was ostensibly made for children. Why? I haven’t the slightest idea. Perhaps thirty years ago a bunch of sickos got their kicks from psychologically tormenting kids.

Think about it. Who wouldn’t want to subject children to the possibility that they could be turned into rats, or that witches may actually exist, or that said witches occasionally gather, forming some sort of nihilistic coven while trying their damnedest to stomp the living guts out of said Rat Kids?

Any one of those notions is enough to provide a lifetime of recurring nightmares. But after writing the article, I decided that I wasn’t going to live the rest of my life plagued by fear. So I returned to the post to face my demons, to look my tormentor dead in the eyes and stare her down until I simply wasn’t afraid anymore.

And that’s when it hit me. Of course all those other things scared the daylights out of me. They still do. But they aren’t at the root of my emotional trauma.

Instead, take a close look at the Grand High Witch. Really, really close. What do you see?

THEY GAVE THE GRAND HIGH WITCH A SCROTUM CHIN!

I’ve been writing about every facet of filmmaking, from location scouting to special effects to the makeup department, for quite some time. Hell, Metaflix even features a weekly series called Movie Detail Monday. And what I find over and over again is that almost NOTHING seen on screen is a coincidence. Nearly EVERYTHING is contemplated, planned, and purposefully executed.

You think the makeup department on ‘The Witches’ applied two distinct orbs protruding from Anjelica Huston’s chin and somehow failed to notice that they looked exactly like testicles? Not bloody likely. They even applied all the wispy hairs!

Even as an adult I can’t bring myself to come to terms with this newfound realization. But as a kid, how could I have possibly reconciled such a vile and disturbing visage subliminally terrorizing my psyche? I couldn’t.

So thank you, Roald Dahl, for writing “The Witches” novel. Thank you, Jim Henson and Warner Bros., for adapting the book into a film. And thank you, Robert Zemeckis, Guillermo del Toro, Kenya Barris, and Alfonso Cuarón for doing a remake of the film, set to be released sometime in 2021. Y’all are surely entertaining the masses and making the world a better place.

Now if you don’t mind, I’m going to crawl into the nearest hole and emerge sometime in the year 2022. So long, bitches witches!