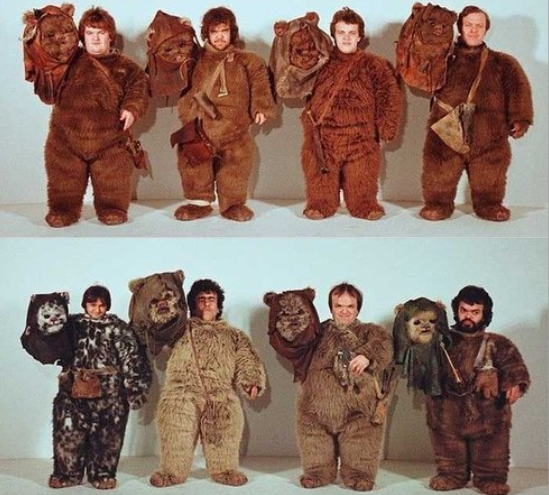 Have you ever wondered what the actors who played the Ewoks in ‘Star Wars: Return of the Jedi’ looked like? Wonder no more!

In this rare behind the scenes casting photo, we get to see the men inside the iconic costumes. More than anything, it gives the casual moviegoer a good idea of just how tedious filmmaking can be. Imagine spending 12-plus hours during shooting days stuck inside such a smelly, stuffy, oppressively hot costume with little mobility and even worse visibility. Not exactly glamorous, is it?

The Ewok costumes may not even be the worst of it. Want to take those uncomfortable notions to the next level? Imagine being Anthony Daniels, who plays C-3PO. Indeed, he’s actually inside of that costume!

Between the two of them, I’m getting the heebie jeebie claustrophobia willies just looking at ’em.