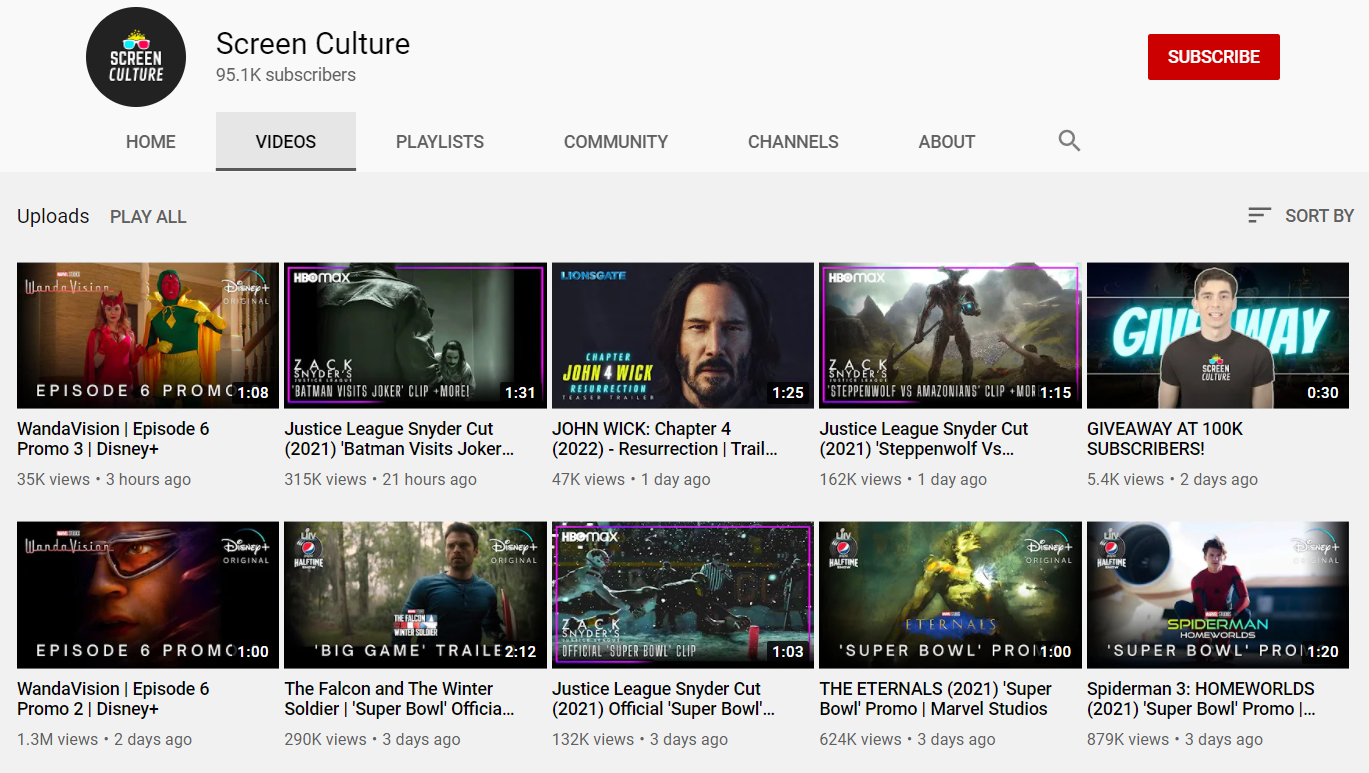 It happens all too often in the age of social and digital media: truth, honesty, and facts get trumped by views, likes, and follows.

Just ask WeGotThisCovered.com or that dude with the cardboard signs–apparently associated with FuckJerry–who decided to throw away years of resonant messaging in order to sell himself out to Bud Light Seltzer Lemonade during last Sunday’s BIG GAME sporting contest (at this point, I legitimately don’t even know if I’m allowed to write the actual name of the event anymore).

So while we’re busy calling people out, we may as well add burgeoning YouTube channel Screen Culture to that growing list of digital outlets who are seemingly devoid of scruples.

For those unaware, Screen Culture bills itself as the home for “beautiful, unique, and thought-provoking video projects” that the channel refers to as “concept trailers.” These so-called concept trailers, churned out at a rate of up to four per day, are made by “combining clips from existing productions and by adding original content like voiceovers, image overlays and other effects,” according to the outlet’s website.

The problem? As long as Screen Culture keeps getting those clicks, they seemingly don’t give a shit if their videos are laden with spoilers, misleading information, or even outright falsehoods, thereby souring and in many cases enraging the fanbases of major media franchises ranging from John Wick to everything under the Marvel banner.

Complaints and accusations levied against Screen Culture are plentiful. The thumbnail for their WandaVision Episode 5 promo video spoiled the ending. The channel put out a notice announcing that WandaVision episodes 5 and 6 would be released on the same day as a double episode, causing a flood of misinformation to spread throughout fan forums. And their “Nick Fury in WandaVision Advert Promo” is bizarrely just a stolen Capital One commercial.

It’s one thing to run a media outlet that is driven by the passion and interests of an engaged fanbase. After all, the very foundation of Metaflix is built upon the love and celebration of cinema. Yet it’s an entirely different station when one flagrantly flaunts the conventions of basic media decency.

Remember that stolen Capital One commercial disguised as a Nick Fury WandaVision Promo mentioned earlier? It’s racked up nearly half a million views in just over a week.

Worse, the entire channel is reaping undue rewards for their misleading deeds. As of this writing, Screen Culture has over 95,000 subscribers and more than 62,000,000 video views. Since November, their account activity has gone stratospheric, as evidenced by the following Social Blade graphic showing just how advantageous gaming the YouTube algorithm can be. According to that social media analytics site, Screen Culture could be earning as much as $140,000 per month as a result–nice coin for doing something so pernicious.

The individual responsible for pulling the marionette strings on this enterprise is Nikhil Chaudhari, an avid Manchester United fan from India. Chaudhari seemingly lives an affluent lifestyle, presumably in the upper stratification of the country’s longstanding and increasingly controversial caste system.

Those who have been duped by Screen Culture are calling for digital blood. The channel has already been banned from numerous subreddits, including r/MarvelStudios. However, the channel’s expanding influence on YouTube isn’t likely to wane anytime soon unless the folks at Disney specifically target it.

Screen Culture operates under the Fair Use doctrine, whereby copyrighted content may be used as long as it is done in a limited and transformative manner, among other considerations. Does the Nick Fury video qualify? Probably not. But most other content put out by the channel does indeed abide by Fair Use standards, regardless of how misleading or spoiler-filled it may be.

Sure enough, there may come a time in which YouTube, or Marvel, or Disney has had enough of Screen Culture’s antics and decides to swat them into oblivion like the comparative gnat that they are. But by the time Chaudhari is done cashing all those YouTube Partner Program checks, he may not have to worry about pulling another paycheck ever again.

Stay tuned to this space for updates.

In this article:Disney, Disney Plus, Featured, Marvel, Screen Culture, We Got This Covered