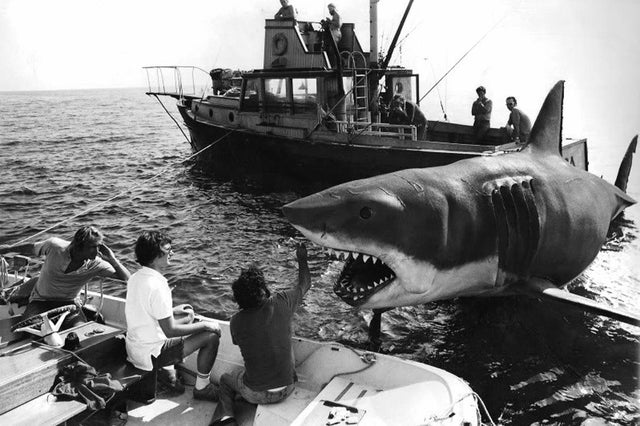 Jaws behind the scenes

It’s been said that the chances of getting attacked and killed by a shark is 1 in 3.75 million. That’s less than the chances of getting struck by lightning or dying of excessive cold. But Steven Spielberg’s “Jaws” has instilled a fear of the ocean and sharks in millions of people since its release in 1975. The film’s great white shark was the main focus of terror and suspense not only for the audience but also for the Spielberg and his crew.

Initially, the producers wanted to train a real-life great white shark for the film but after realizing that was not possible, three full-sized mechanical sharks were built instead. Collectively dubbed by the film’s crew as “Bruce”, the name was a reference to Steven Spielberg‘s lawyer Bruce Raynor. Although a fascinating and awe worthy build, the mechanical sharks were notorious for being difficult to work with. The shark animatronic would capsize and sink, causing divers to retrieve it. Salt water would corrode both the inside and outside of the shark, making it impossible to operate.

But because of the shark’s many technical difficulties, Spielberg chose to have Bruce lurk underneath the waters for the majority of its appearance, only teasing at its enormous size by showing parts of the large creature. This technique ended up creating a terrifying impact during the final cut and further enhanced the suspense of the film by amping up the fear of the unknown.

Additionally, because Bruce’s screen time was cut so short, every moment the mechanical shark was on screen it was memorable. Technical errors and malfunctions actually ended up enhancing the movie, solidifying its place as one of the most influential horror movies of all time.