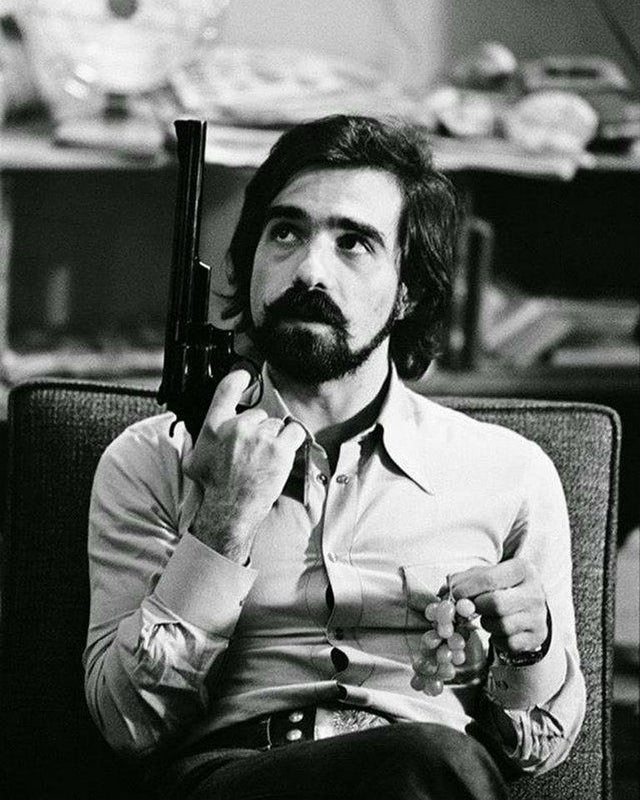 Martin Scorsese has a habit of being in the news for saying one thing for another. He has criticized the at-home movie experience, before of course directing a film for Netflix. He famously was in hot water for saying Marvel movies were “not cinema”. Most recently, Scorsese has gone after streaming services for liberally using the word “content,” which he believes devalues the art form of cinema.

And while I may disagree with his confusing fight against streaming services (again, he just made a movie for them. Seriously, Martin, you can’t have it both ways!), he still stands as one of film’s greatest directors. I don’t need to write too much about “Taxi Driver,” since everybody else has. Everybody here at Metaflix has already said everything there needs to be said.

But this photo is quite interesting as a portrait of a young director about to completely dominate the landscape of film. In one hand, he’s got a long gun, fitting for the films he chooses to make in the next fifty years. In the other hand, he has… grapes? I guess grapes often are symbolic of Christ and wine. While it may be a stretch to assume anybody holding grapes is making a Christian symbol, it’s not a stretch for Scorsese.

For his entire career, Martin Scorsese has been obsessed with religious themes. His passion project, “Silence,” was his most overt exploration of religion. Even the Irishman was a culmination of years of discovery.

With that interpretation, this image is everything Scorsese. Violence, God, and a whole lot of style. That feels quintessentially Marty.