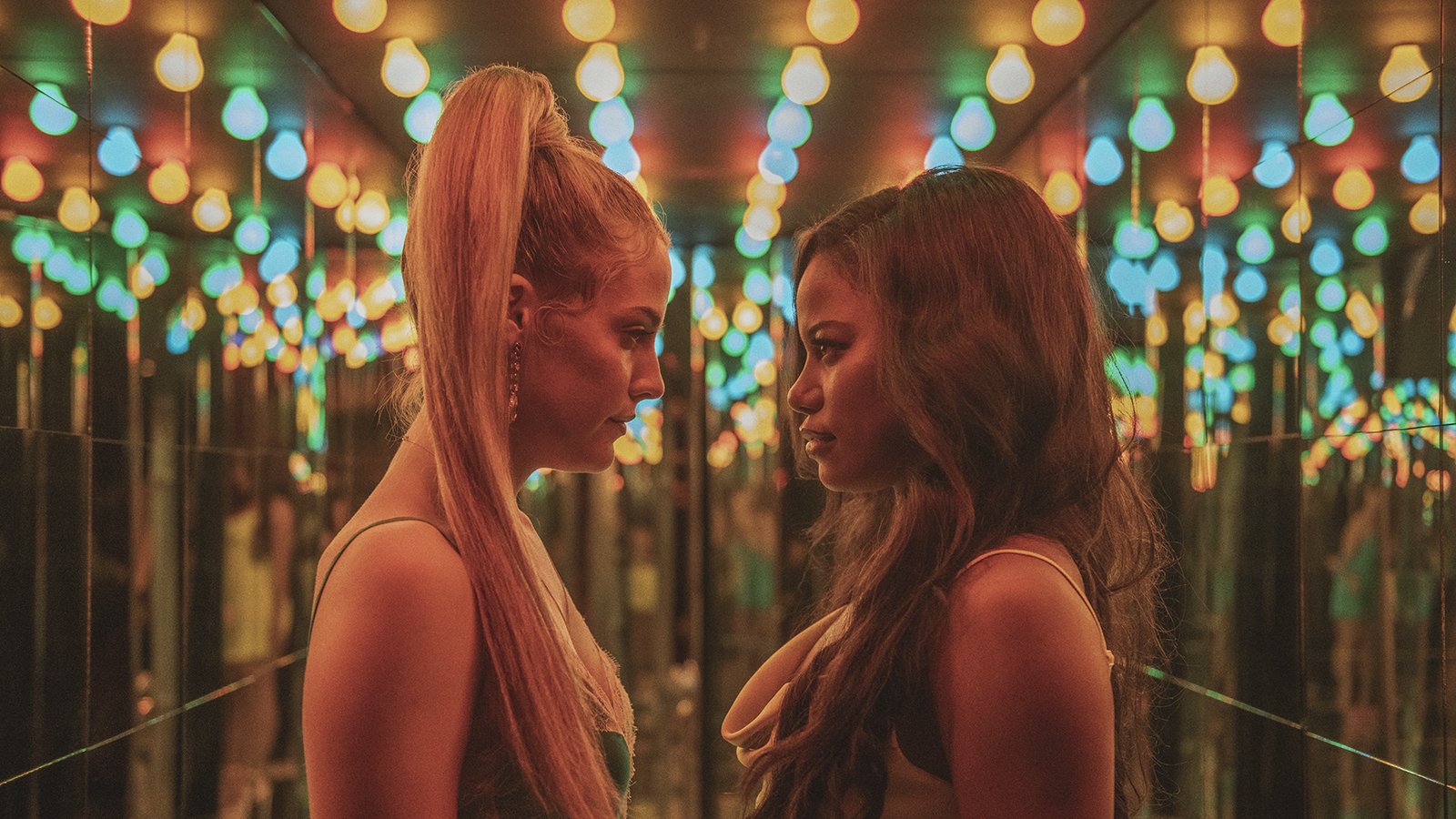 In 2015, a waitress/stripper named A’Ziah “Zola” King fired off a tweet that would change the course of her life. “Y’all wanna hear a story about why me and this b**** here fell out? It’s kind of long but full of suspense.” What followed was 148 tweets chronicling her nightmarish trip to Tampa Bay that captivated the internet, and catapulted Zola’s story to the silver screen (six years later). The film isn’t very long, has a fair amount of suspense, and plenty of humor.

The film opens with a look at Zola and her suspicious new companion, Stefani, as they meticulously get ready for what one can assume is exotic dancing. The camera glides across their reflections in several mirrors, as the synthetic score entrances you. This scene and many others give an unexpected but enticing dignity to Zola’s profession. This is essential, because the film often pokes fun at its characters and satirizes their behavior, but never disrespects their way of life.

While the plot of the film is a bit wild and completely unpredictable, Janicza Bravo maintains an extremely cohesive vision. The cinematography is enchanting from the first shot. The 16mm film gives the entire film a hazy, dream-like quality, which is able to naturally evolve into a nightmare. The modern score perfectly underscores this, and tastefully utilizes digital sounds from cell phones and other technology as a nod to the origin of the story. This unity of sound and style makes the film feel as charming as Taylour Paige’s performance as Zola.

The casting of this film is essential and almost perfect. The use of fairly unheard of actors allows the viewer to fully slip into Bravo’s stylized realism and suspend all disbelief. Colman Domingo is terrifying as X, Riley Keough is frustratingly clueless as Stefani, and Nicholas Braun is excellently continuing his career pivot from playing the antagonistic high school jock to more clumsy, dopey characters. Braun’s Derrek is probably the only character that will make you laugh out loud, but he will do it a few times. I personally bought my ticket after I saw his character awkwardly mumble “we makin’ schmoney,” in the film’s trailer.

The true break-out performance of this film, in all likelihood, will be that of Taylour Paige. Zola clearly has a wild side, and thrives as an exotic dancer, but is nonetheless pensive, intimidating, and measured with her actions. You can never be frustrated with her decision-making, which would seem to be a fairly easy pitfall for a film about a road-trip to Florida to strip.

Throughout the film, Zola doesn’t have much to do, as most of the misfortune is simply thrust upon her, but Paige’s alluring performance allows the audience to continually sympathize and relate with the character. Despite having no similar life experience, I could feel Zola’s anger as I recalled simple memories of friends misleading me into frustrating situations. Paige and Braun are both infectiously charismatic, even if their characters make poor decisions at times.

While breaking the fourth wall is a somewhat tired trope, the film was able to do it in creative ways. However, I wish they leaned into the dreamy, fantastical elements of the film a bit more. One of the best scenes of the film was when Zola was getting ready for the Tampa nightclub, and we see her appear in the folding mirrors in several different costumes, hypnotically repeating to herself, “Who you gonna be tonight Zola?” This, to me, was the most fascinating moment in the film, and an avenue which I hoped would be explored further. It felt like the tip of the iceberg on a great b-story, or simply an important addition of depth to Zola’s character. Is this why she has come to Tampa — to be someone else? Is this why she dances? What does Zola want — who does she want to be? Sadly, none of these questions are really answered. Zola remains a mystery to the audience, which helps the film in some ways, but hurts in the grand scheme of things.

Another issue with the film was the dramatic pacing. Suspense builds steadily until the midpoint, where seemingly all is revealed: Zola made a bad choice, and Stefani and her pimp are bad news. While there are more climactic actions, there aren’t many onscreen consequences to them, rendering most of them meaningless. After the reveal, we’re simply along for the ride, one which we know Zola survives. It seems like there could be a more suspenseful version of this film where the audience doesn’t know Stefani is wicked until the very end, adding emotional tension to the dark sexual implications. Perhaps in this version, Zola’s boyfriend whose name you certainly won’t remember, could have some sort of importance to the plot or development of Zola’s character. Maybe I should be careful what I wish for, Hollywood will reboot anything after a decade.

This is very likely Bravo’s strongest work to date, and a promising milestone for her career. The film doesn’t have enough humor to be a laugh-out-loud comedy, nor enough dramatic tension to be a suspenseful thriller, but it has enough of both to suffice as a fairly satisfying dramedy all the same.