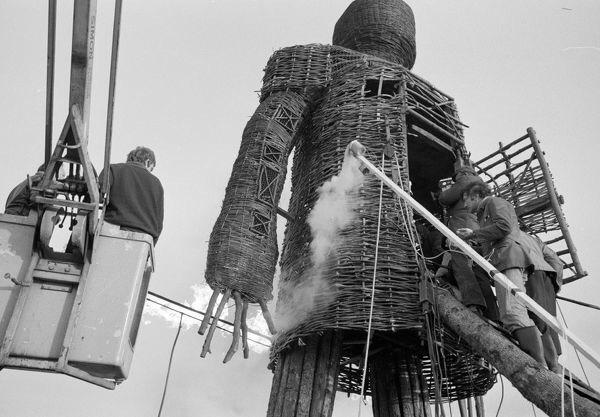 The Wicker Man behind the scenes

The 1973 folk horror film “The Wicker Man” remains a classic for fans of the genre. The cult classic has been hailed as the “Citizen Kane” of horror movies. Seeped in unusual imagery and scenes that plays out almost like some sort of strange musical, “The Wicker Man” opts for a more unsettling horror rather than a horrific horror. But perhaps one of its most memorable moments is the climatic twist ending that leads up to the iconic burning wicker man scene. The scene is so unforgettable that it made it as No. 45 on Bravo’s 100 Scariest Movie Moments.

For those who don’t know the premise of the film, “The Wicker Man” centers around Police Sergeant Neil Howie (Edward Woodward) who comes to the island of Summerisle to investigate the case of a missing girl. While there, he notices the Islanders participating in Pagan rituals and leader Lord Summerisle (Christopher Lee) who encourages them. As a devout Christian, Howie is deeply disturbed by this. When Howie finds the missing girl, he concludes that she is to be used by the villagers as a human sacrifice for a bountiful harvest and tries to help her escape. However, the girl runs to her captors, revealing the film’s pioneering twist ending where Howie realizes that it has all been a lie and that he was the villagers’ pawn the whole time. As he is tied up and forced into a wicker man statue to burn to death, Howie prays to God as the head of the wicker man collapses in flames.

In this behind the scenes photo, you can see a small glimpse into how the memorable finale scene was filmed. And check out the video below to see some more iconic scenes from “The Wicker Man”.

In this article:Christopher Lee, Edward Woodward, The Wicker Man